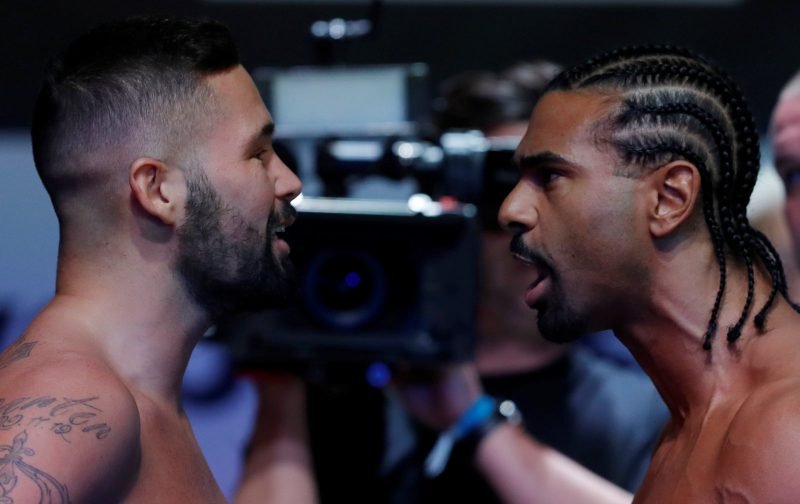 At the O2 Arena, in London, Haye will be looking to get revenge after Bellew earned a victory in their first clash, a fight that saw Haye carry an injury into the ring which eventually resulted in a badly ruptured Achilles tendon that saw Bellew awarded a stoppage victory.

Yesterday, Friday, the two boxers attended the obligatory weigh-in and went head-to-head for the last time before they meet in the ring tonight.

Surprisingly, both boxers weighed in lighter than they did for their first clash, Bellew tipped the scales at 210 pounds, whilst Haye’s official weight was given as 220 pounds.

Bellew, as was the case for the first fight, appeared to be carrying excess weight, a result of moving up from being a natural cruiserweight to a heavyweight, whilst Haye looked to be in perfect physical shape.

Naturally, both boxers engaged in verbal attacks in the head-to-head, but there was an element of calmness this time that was missing for that chaotic first fight.

Here at Vital Boxing we’ve carried many articles relating to the fight this week, but we’ve never nailed our colours to the mast and predicted who is going to emerge the winner.

Well the time has come now to put that right.

Sat in the editorial chair, I’ve a gut feeling that Haye will win this one, making it one win each and thereby setting up the opportunity for a third and final fight, with the contract containing a clause that Bellew can seek a re-match if he loses this one.

But how will Haye win?

Bellew is, there’s no doubt about it, a tough cookie, but we’re of the opinion if Haye can land a couple of big blows then Bellew will be the victim of a stoppage in the middle rounds of the fight.

Good luck to both and let’s have a clean fight, as they say!